Shaking the Heavens was created to unite the body of Christ through prayer, the only way that we can be and act as one until we all are completely led by the Holy Spirit. We are NOT here to compete with churches or other ministries, our purpose is to unite them all. In fact, if you are not a part of a local church, you need to get connected. Local family and friends are very important to your walk with Christ. They will be there with you to celebrate your victories and help you overcome adversity. We also encourage getting involved in your local church to help build and strengthen the kingdom or get involved with a local ministry to spread the word through acts.

Jesus came to bring life and life more abundantly. We walk as sons and daughters and joint heirs to the Kingdom. Jesus said the works I do we will do, and greater works and His prayer is that we become one with Him, with our Father, the Holy Spirit and each other. We cannot do this if we are all acting alone in our own little bubble, whether it’s with our household, our church, our community, etc… Although each and everyone of those are very important in the Kingdom, we need to act as a whole on a global scale. And realistically, the only way we can do that is by prayer. The bible is clear that our fight is not against flesh and blood but against principalities and powers of the devil. Our war is in the spiritual not the physical.

We each have our own lives that we need to attend to, we don’t worry about them, because we should give them to Jesus. We need to seek first the Kingdom of God and the rest will be given to us. This means that life abundantly is ours when we seek the kingdom first. No more poverty, no more sickness, no more disease! The kingdom of God does not contain those things! His Kingdom come, His will be done on EARTH as it is in HEAVEN! On earth as it is in Heaven, it can happen, but we need to start thinking that way. In Heaven, we will all be one, doing whatever we see the Father do, just as Jesus does. Jesus heals the sick and diseased, raises the dead, and gives to those in need. You don’t want to see your best friend get sick, so why would you want your brother or sister to be.

We are called to be one and act as one. This cannot be accomplished without everyone acting. It cannot be done through a church, it can only be done by The Church. Shaking the Heavens was created for that purpose. To bring everyone together no matter what denomination, background, ethnicity, origin, sex, race, etc. for the ONE purpose, to bring His kingdom and His will to earth, just as it is in Heaven. Join us in praying daily, uniting the body as one, and allowing the power of Jesus to work on the earth.

The promised is a land flowing with milk and honey, the perfect place that has everything we need and desire. His desire for us is to live and dwell in His love, peace, joy, righteousness and have life more abundantly. He wants us to be and act as ONE just as He and His Father and the Holy Spirit are. We cannot do this if we are all working our own angles and agendas.

JOIN US IN SHAKING THE HEAVENS. Increase your faith, be obedient to His word and pray, pray without ceasing His Kingdom come, His will be done on earth as it is in Heaven.

Revival, Revolution, we call it both, a Revivolution™! So what is revivolution™? Simply put, revivals are an awakening which is something we all want and we know this world needs. But, if you are like us we don’t want an awakening and everyone go back to sleep like has happened throughout history. We want to see a change, a change that remains and reshapes the world. This only happens with a change in lifestyle, a change in thought process, a change in the way things are done. It is time for us to fight, to fight against the powers and principalities that have destroyed our world and its people. It’s time to live the way God intended us to live as one in spirit and in truth.

Join with us to make these changes in our daily lives and those around us. Without you, without us, as one we cannot change anything.

25 See that you do not refuse Him who speaks. For if they did not escape who refused Him who spoke on earth, much more shall we not escape if we turn away from Him who speaks from heaven, 26 whose voice then shook the earth; but now He has promised, saying, “Yet once more I shake not only the earth, but also heaven.” 27 Now this, “Yet once more,” indicates the removal of those things that are being shaken, as of things that are made, that the things which cannot be shaken may remain.

28 Therefore, since we are receiving a kingdom which cannot be shaken, let us have grace, by which we may serve God acceptably with reverence and godly fear. 29 For our God is a consuming fire.

1 In the second year of King Darius, in the sixth month, on the first day of the month, the word of the Lord came by Haggai the prophet to Zerubbabel the son of Shealtiel, governor of Judah, and to Joshua the son of Jehozadak, the high priest, saying, 2 “Thus speaks the Lord of hosts, saying: ‘This people says, “The time has not come, the time that the Lord’s house should be built.” ’ ”

3 Then the word of the Lord came by Haggai the prophet, saying, 4 “Is it time for you yourselves to dwell in your paneled houses, and this temple to lie in ruins?” 5 Now therefore, thus says the Lord of hosts: “Consider your ways!

6 “You have sown much, and bring in little;
You eat, but do not have enough;
You drink, but you are not filled with drink;
You clothe yourselves, but no one is warm;
And he who earns wages,
Earns wages to put into a bag with holes.”

7 Thus says the Lord of hosts: “Consider your ways! 8 Go up to the mountains and bring wood and build the temple, that I may take pleasure in it and be glorified,” says the Lord. 9 “You looked for much, but indeed it came to little; and when you brought it home, I blew it away. Why?” says the Lord of hosts. “Because of My house that is in ruins, while every one of you runs to his own house. 10 Therefore the heavens above you withhold the dew, and the earth withholds its fruit. 11 For I called for a drought on the land and the mountains, on the grain and the new wine and the oil, on whatever the ground brings forth, on men and livestock, and on all the labor of your hands.”

The Coming Glory of God’s House

2 In the seventh month, on the twenty-first of the month, the word of the Lord came by Haggai the prophet, saying: 2 “Speak now to Zerubbabel the son of Shealtiel, governor of Judah, and to Joshua the son of Jehozadak, the high priest, and to the remnant of the people, saying: 3 ‘Who is left among you who saw this temple in its former glory? And how do you see it now? In comparison with it, is this not in your eyes as nothing? 4 Yet now be strong, Zerubbabel,’ says the Lord; ‘and be strong, Joshua, son of Jehozadak, the high priest; and be strong, all you people of the land,’ says the Lord, ‘and work; for I am with you,’ says the Lord of hosts. 5 ‘According to the word that I covenanted with you when you came out of Egypt, so My Spirit remains among you; do not fear!’

The People Are Defiled

10 On the twenty-fourth day of the ninth month, in the second year of Darius, the word of the Lord came by Haggai the prophet, saying, 11 “Thus says the Lord of hosts: ‘Now, ask the priests concerning the law, saying, 12 “If one carries holy meat in the fold of his garment, and with the edge he touches bread or stew, wine or oil, or any food, will it become holy?”

Then the priests answered and said, “No.”

13 And Haggai said, “If one who is unclean because of a dead body touches any of these, will it be unclean?”

So the priests answered and said, “It shall be unclean.”

14 Then Haggai answered and said, “ ‘So is this people, and so is this nation before Me,’ says the Lord, ‘and so is every work of their hands; and what they offer there is unclean.

15 ‘And now, carefully consider from this day forward: from before stone was laid upon stone in the temple of the Lord— 16 since those days, when one came to a heap of twenty ephahs, there were but ten; when one came to the wine vat to draw out fifty baths from the press, there were but twenty. 17 I struck you with blight and mildew and hail in all the labors of your hands; yet you did not turn to Me,’ says the Lord. 18 ‘Consider now from this day forward, from the twenty-fourth day of the ninth month, from the day that the foundation of the Lord’s temple was laid—consider it: 19 Is the seed still in the barn? As yet the vine, the fig tree, the pomegranate, and the olive tree have not yielded fruit. But from this day I will bless you.’ ”

Zerubbabel Chosen as a Signet

20 And again the word of the Lord came to Haggai on the twenty-fourth day of the month, saying, 21 “Speak to Zerubbabel, governor of Judah, saying:

‘I will shake heaven and earth.
22 I will overthrow the throne of kingdoms;
I will destroy the strength of the Gentile kingdoms.
I will overthrow the chariots
And those who ride in them;
The horses and their riders shall come down,
Every one by the sword of his brother.

Thank you for your heart for the Lord and wanting His kingdom and will on earth just as it is in Heaven. Unity starts with U and can only happen with you and I.

Tell your friends, congregations, followers, relatives, random strangers. It’s time we Stand! Call, text, message, email, and/or share these posts with everyone and unite the body as ONE! Bring His kingdom to earth, just as it is in Heaven!

Are You Ready to Start Shaking the Heavens?

ARE YOU READY TO JOIN THE 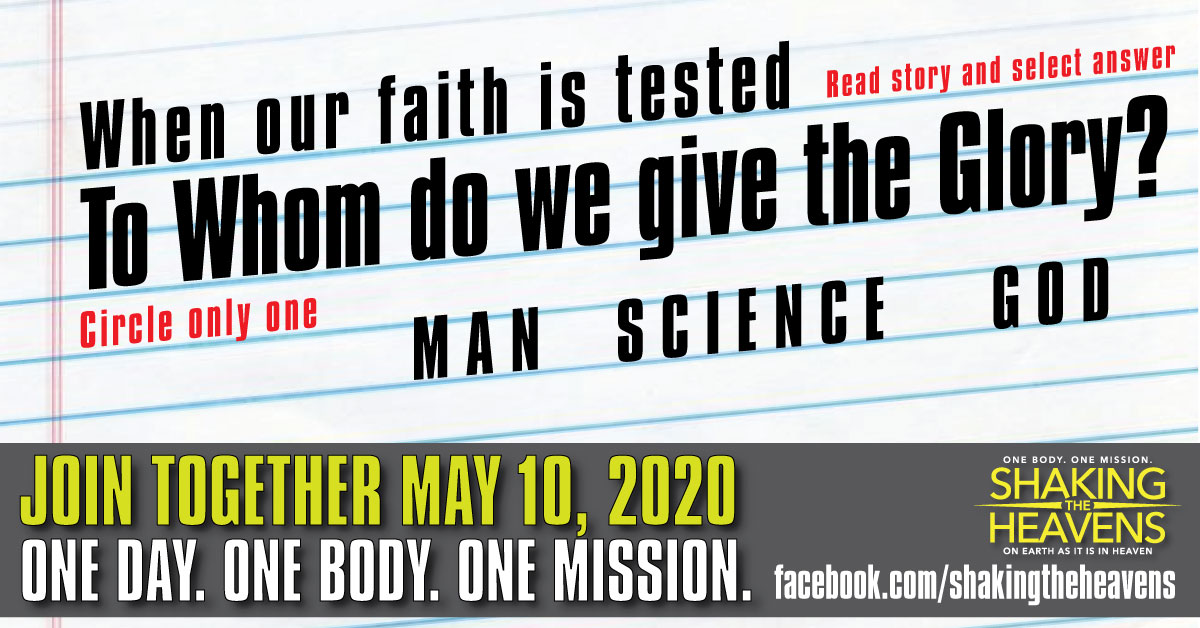 Faith Test: Who gets the Glory?

When an issue comes up we typically act quickly to solve the problem, to take away the pain. We sweep the dirt under the rug 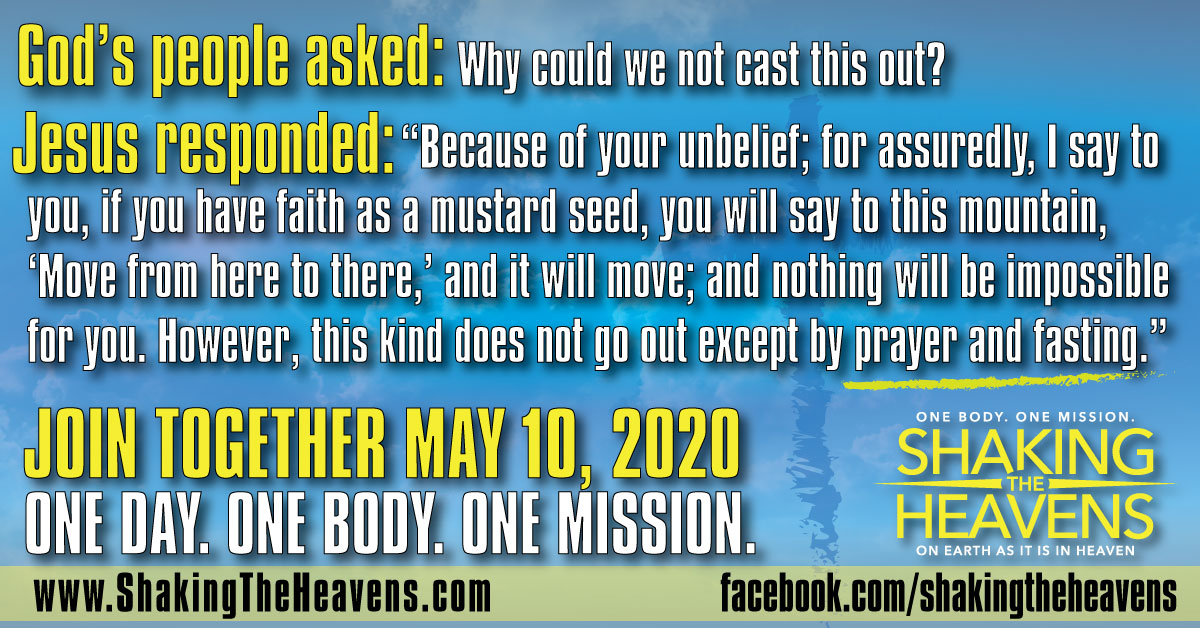 God and the coronavirus. What is He doing? part 1

If you believe in Jesus Christ you need to read this. The impact the Coronavirus has had on the world is unreal, I personally did 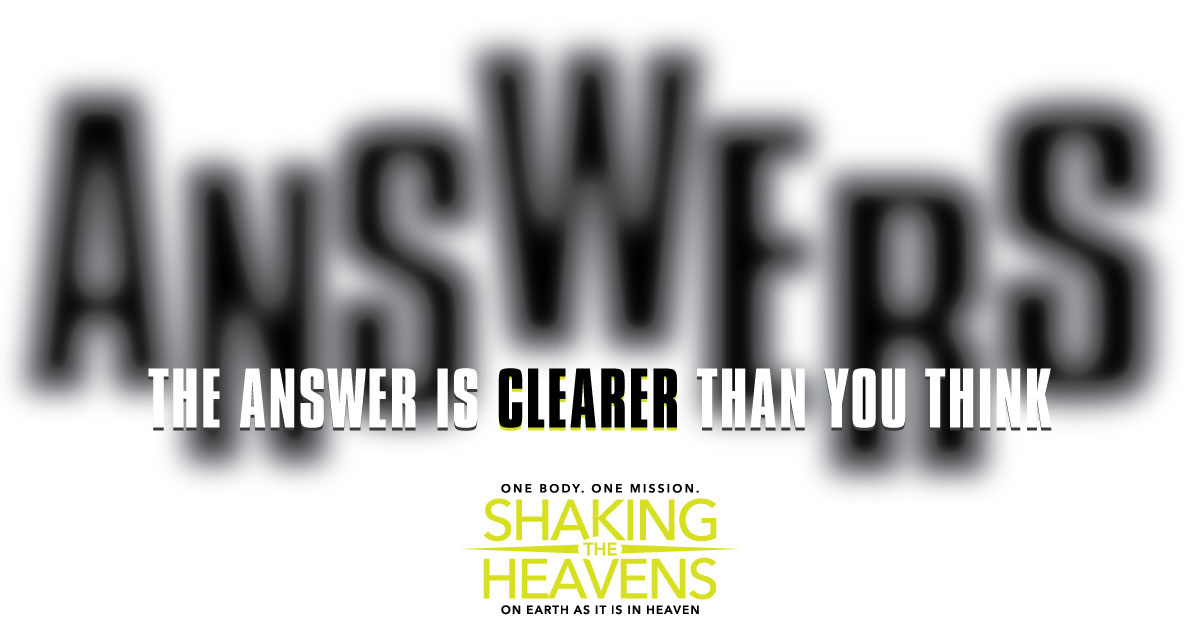 How many times have you prayed to God for an answer and He put it right in front of you and you didn’t take it? 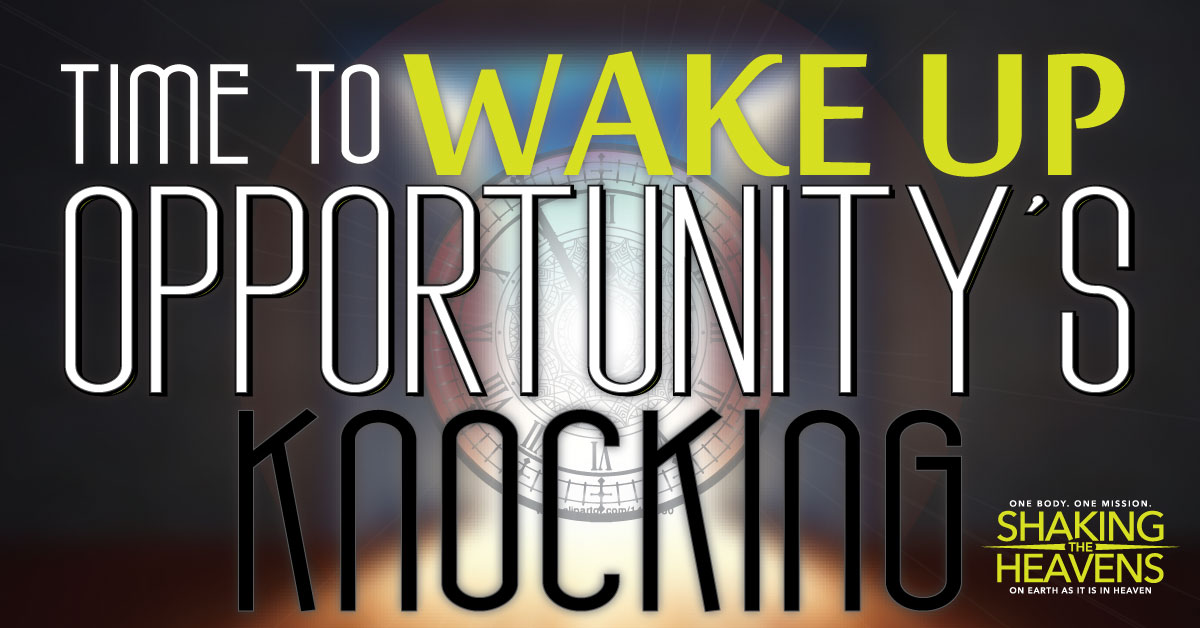 To all believers in Jesus Christ, It’s Time for War! A Call to Action!   Death, sickness, and disease have always weighed heavy on my heart